During my childhood, I lived in close contact with the Batswana, Bakgalagadi and the San of the Kalahari and I was fascinated by the peoples of Africa and the variety of cultures. People who survived the “wilderness” and the elements of the harsh African landscape in the fullest force through skills adapted to the conditions and only known to them. This puts the African in a different class but by no means in an inferior category of intrinsic values as the westerner.

In Africa, lived highly sophisticated and developed people who had kingdoms, trade routes, infrastructures and even a written language, the Ogam, of which we observe the remnants today. Who were these civilised people with beautiful architecture and structural strongholds which we may admire? The answers are to be found in and on the rocks which are scattered all over South Africa, but they remain riddles – the mysteries of Africa.

Many rock engravings, mainly animals, were done by the San, but there are as many of which we do not know the origin; the non-figurative, geometric symbols. Symbols of Earth Mother, Father Sun, fertility, water, strongholds, ladders, grids, and much more which were certainly not done by the San.

This non-figurative symbol language on the rocks was used as a vehicle of communication in ancient times. The inscriptions were picked out by scribes with specific messages, like letters of advice, left for specific groups, travellers, inhabitants, allies, nomads, or descendants to understand and benefit from.

Similarly, these symbols may be seen as an alphabet for communication in a contemporary context. Through my art, I may indulge in improvising and re-interpreting the symbols putting them in a Western continuum: The mystery of man as part of history and history as part of man.

The concept of my art is to depict the mystery of the obscure past of Africa and has nothing to do with the scientific correct approach of archaeologists, ethnologists and socio-anthropologists. Therefore, look at my works as the opinion of an objective observer of the mysterious past of Africa.

In closing a quotation that most accurately sums up my work:

“Coral believes that non-figurative art portrays the artist’s soul and that when art exposes that which cannot be seen, it is not merely a copy or purely decorative. She feels that this reveals an emotional state, a story, a meaning and that not all pictures are art because not all pictures bear witness to the soul.” E.H. du Plessis in an article for Nouveau Magazine. 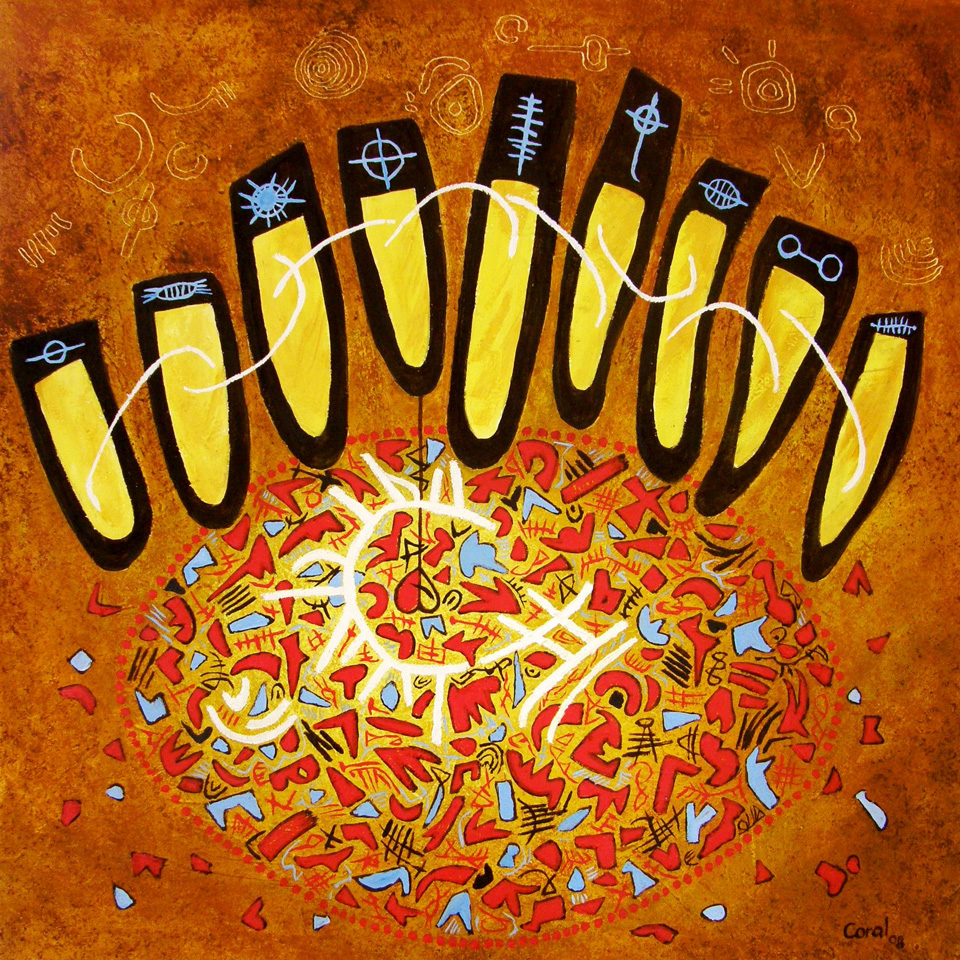 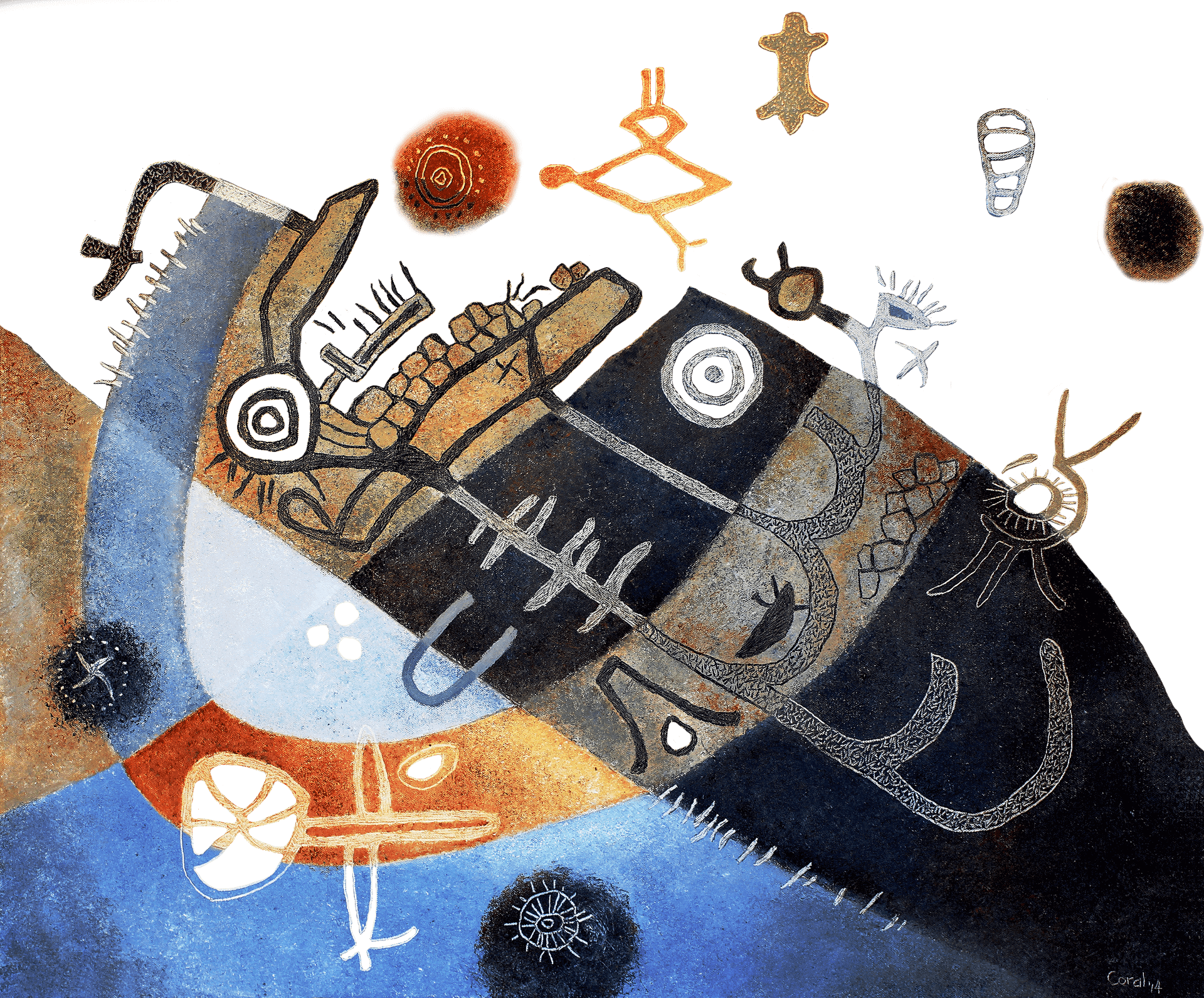 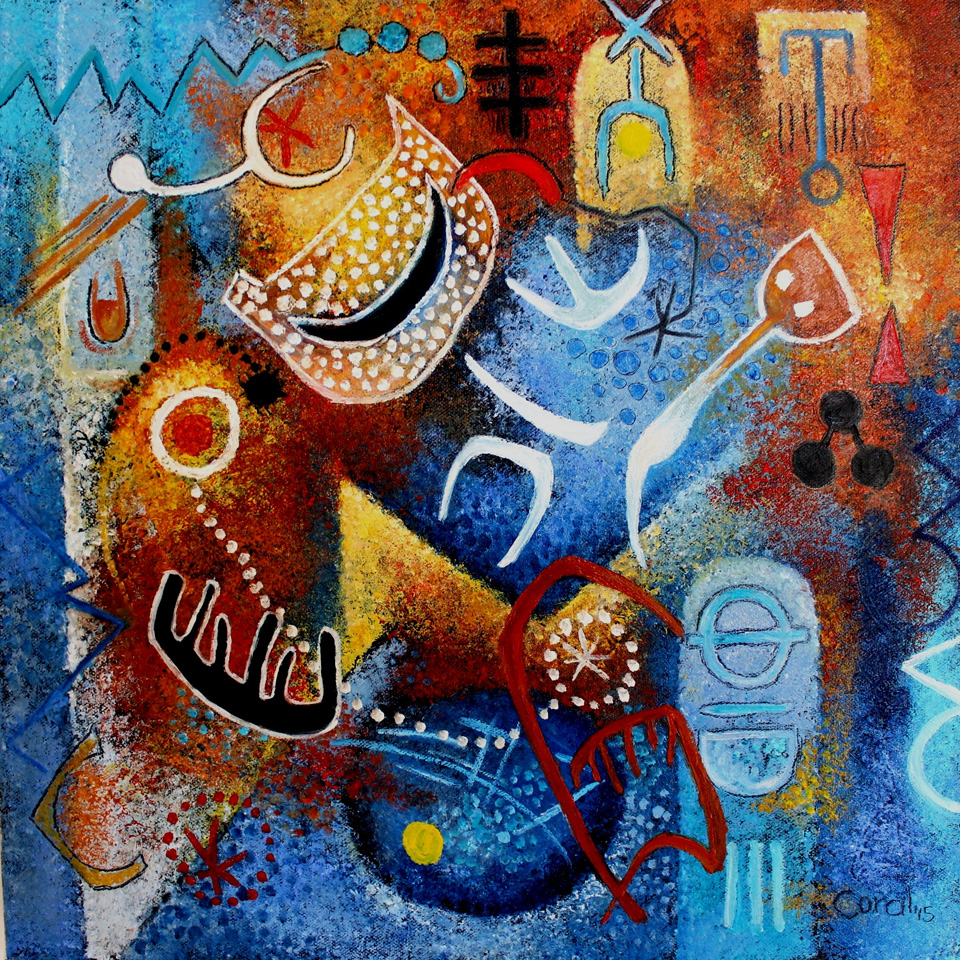 Coral Fourie (neé Knobel) was born in Mahikeng in 1937.   She spent a large part of her formative years in the Kalahari and Botswana where she befriended and built steady friendships with the Bakwena tribe of Batswana, Bakgalagadi, G/hana, G/wii and Khua San peoples.  Some of the major influences during this time were meeting South African writers, such as P.J. Schoeman and W.A.de Klerk, who were friends of the family as well as her father’s cousin, Hein Knobel, who was a keen photographer and anatomy student. The impressions which impacted most on her psyche, however, were doing traditional wall paintings with mud and cow dung with her playmates’ mothers and watching Bushmen doing etchings on ostrich eggshells.

After school, she attended the Pretoria Teachers’ Training College where Walter Battiss was one of her tutors. Bill Ainslie from the Johannesburg Art Foundation followed in this role in the later years while she was an art teacher.

She has participated in 32 exhibitions, mostly solo shows, throughout her adult life, completed numerous commissions, has been included in numerous collections and has written three books, with one translated into German and another one published in four languages simultaneously; Afrikaans, German and English, French.

At an age when people are supposed to retire, Coral started with a full-time professional career as an artist. This year (2017) she will be celebrating her 80th birthday with a retrospective exhibition at the Potchefstroom Campus of the North-West University.

She has lived with her husband, Jan, and four children in Lichtenburg, Pietersburg, Thabazimbi, Tsolo in the Transkei, Lebowa, and Hartswater (teaching in Taung).  She presently resides in Parys in the Free State. 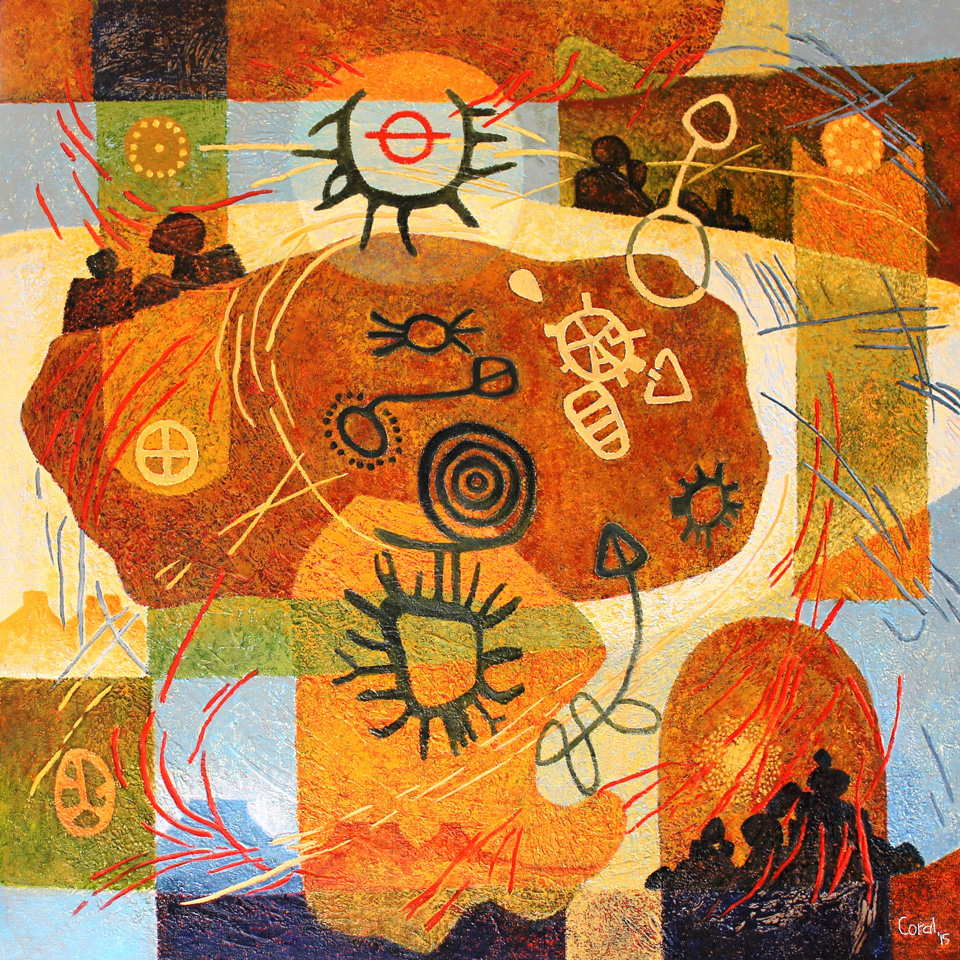 The magical language contained in the painted symbols and rock engravings of sub-Saharan Africa serves as a point of departure for Coral Fourie’s investigation of time and space.  Where previously her oeuvre explored the mystery surrounding these marks of unknown origin and age, her focus has now shifted to the cyclical nature of the time-space continuum.

Rock art has thus become a metaphor or marker for time against the timelessness of the natural habitat that shaped her as a child of the Kalahari and Namib deserts.  Time is for Fourie about memory and remembrance – a precious commodity to be treated with circumspection.

She reads the symbols in a very personal way, conjecturing possible meaning devoid of scientific interpretation by archaeologists, ethnologists and socio-anthropologists. This intuitive and spiritual action allows her to become a post-colonial observer of African cultural production, linking pre-modern life of an unidentified people to a postmodern context

Like the artists of prehistory, her non-figurative abstract work is devoid of people.  She rather recognises mark making in nature – be it in shapes the wind left in the sand, that of a snail spoor on the sea rock or the magnificent petroglyphs people of antiquity created.

Fourie contextualises the residue or metaphorical pointers as an intervention at a certain time thereby merging the concept of time with that of the landscape or space from where it originated in vibrant colours reminiscent of the African sky and earth.

Her work is a testimonial of her physical and metaphysical travels and keen observation of this vast continent with an understanding of the colour of the spaces in which time is reconstructed.

By Annali Cabano-Dempsey
Curator of the UJ Art Gallery

“A human being is insignificant in the face of Creation.” Coral Fourie

An Interview with Coral Fourie.

A talk about my art and inspiration.


Error: Access Token for coral_fourie is not valid or has expired. Feed will not update.

Make sure this account has posts available on instagram.com.

Error: admin-ajax.php test was not successful. Some features may not be available.

Please visit this page to troubleshoot.